The province of Florence, with an average of 669 kg of per capita waste per year (2007 data), had one of the highest productions of waste in Europe. In the same period the EU-27 average was 546 kg/ inhabitant. The WASTE LESS IN CHIANTI project aimed to contribute to the implementation of EU and national waste prevention policies through the implementation and monitoring of an integrated program of waste reduction actions and optimization of the collection systems combined with targeted information campaigns for citizens, as well as mobilization of local actors.

The target area was the territory of Chianti Fiorentino, a territory of about 400Km2 which includes the municipalities of Barberino Val d’Elsa, Greve in Chianti, San Casciano Val di Pesa and Tavarnelle Val di Pesa.

The project set a reduction target of 100 kg of waste/ inhabitant/ year (approximatelly 15% of the 2007 data) by 2020. The steps envisaged for the achievement of this goal and, ultimately, for the reduction of CO2 in the Chianti, were:

To achieve the objectives, the project moved on two fronts. On the one hand fostered the creation of a new "waste culture" by promoting more recycling-oriented behaviors among citizens and, on the other, introduced modifications in the organization of the collection systems in line with the EU principle of waste management hierarchy which places at the top of the pyramid the prevention followed, in order, by reuse, recycling and disposal.

The interventions put in place fulfilled the project's expectations by proving to be a valid tool for promoting waste prevention and reduction.

To achieve a significant impact on the containment of local waste production, it was necessary to act on several levels, starting from citizens’ behavior, through reconsideration of the offered services, up to the waste collection system. Therefore, the implemented actions were of different nature:

Optimization of the collection systems

Communication and actions aimed to involve the local players

The project achieved in advance the expected results, scheduled for 2013, 2916 and 2020. Compared to 2007, year of reference for the evaluation of the achieved results, at the end of 2013 there was a reduction in municipal waste production of 17% equal to 121 kg/ inhabitant/ year, much higher than the 100 kg target set for 2020. Taking as reference 2010, year of start of the project, the total waste production decreased by 9%.

This also includes the results deriving from the new waste collection systems which were introduced in Greve in Chianti in May 2013, in San Casciano Val di Pesa in June 2013 and in Tavarnelle Val di Pesa in August 2013, and led to a significant increase in the share of separate collection in all municipalities.

The main results of the single actions were:

The effectiveness of the actions carried out was monitored by a system developed for detection and evaluation of the achieved results. The acquisition and re-processing of data was carried out through a specific online portal onto which registered users (project partners and brand members) uploaded their input data necessary for the calculation of the monitoring parameters, and public could view the results.

The project has been awarded the Best LIFE Environment. 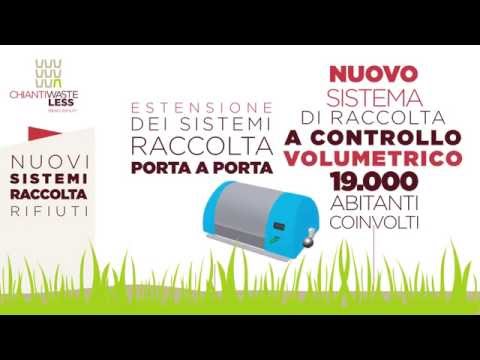