The LIFE Save the Flyers Project was implemented in two areas of Central Italy: the area of Mount Amiata  in South Tuscany and the Natural Regional Park Gola della Rossa e Frasassi located in an area of the central Apennines within the Marche Region. These areas are characterized by a very rich flora, cavities and caves that house bats and a great variety of birds, including many birds of prey. The project involved many SCIs and SPAs: in Tuscany Cono vulcanico del Monte Amiata (SCI IT51A0017), Monte Penna Bosco della Fonte e Monte Civitella (SCI IT51A0020) as well as the SCI/SPA Monte Labbro e Alta Valle dell'Albegna (IT51A0018) and Alto corso del Fiume Fiora (IT51A0019). In the Marche region: Gola di Frasassi (SCI IT5320003), Gola della Rossa (SCI IT5320004), Valle della Vite e Valle dell’Acquerella (SCI IT5320012) and Valle Scappuccia (SCI IT5320002), moreover the SPA Gola della Rossa e di Frasassi (IT320017) and Valle Scappuccia (IT5320016). The project had three main objectives: to favor the conservation of Chiroptera inhabiting the project areas; to help the settlement of two independent populations of red kite (Milvus milvus); and to significantly decrease the risk of electrocution in red kite and other species of raptors listed in Annex I of the Birds Directive.

Actions to protect bats were aimed at reducing the major threats affecting this species in the two project areas, such as uncontrolled access of  persons into the underground caves hosting bats in the period of reproduction and wintering; loss of feeding due to expansion of shrubs; and rare presence of trees old enough to have slits offering refuge to Chiroptera. Another goal achieved by the project was the consolidation of two preexisting populations of red kite introduced in 2007 within the frame of another LIFE project, Biarmicus (LIFE04 NAT/IT/000173), awarded the “LIFE Best Nature Project” prize in 2009. IUCN (International Union for Conservation of Nature and Natural Resources) has included red kite among the species in unfavorable state of conservation in Europe, covering the 95% of the breeding population; while at national level this raptor is among the "vulnerable" species of the Red list of Italian vertebrates. In both project areas the presence of medium voltage power lines structured in a manner not preventing the risk of electrocution in birds in the proximity of the not isolated pylons, impacted different bird species, and in the area of Mount Amiata in particular, the just reintroduced red kite. The target areas of the project have big surfaces dedicated to agro-silvo-pastoral activities, and especially in Tuscany the extensive sheep breeding is an extremely widespread practice. There are also several farmhouses in these areas.

In the first project phase a study was conducted on the bat fauna of Mount Amiata and of the Frasassi National Park.

The actions of the implementation phase were focused on the conservation of bats:

Stabilization of the red kite populations, already present in the two project areas, was achieved with a procedure successfully applied in different regions of Great Britain. Said procedure consisted first in the translocation of young red kite exemplars from France (Corsica) and Switzerland (Canton of Friborg), their two-month-long stay in an aviary, finally their release supported by food supply ensured in special feeders. Red kites were freed in the Centre for Threatened Raptors (CERM) near Rocchette di Fazio (province of Grosseto) where two feeders were placed and a small observatory was created. The released kites were also equipped with remote monitoring devices. The project was further developed through awareness raising and dissemination activities to promote the knowledge about Chiroptera and red kite.

The LIFE project SAVE THE FLYERS provided important information regarding possible solutions for  isolating the power lines in order to prevent the risk of bird electrocution. Prior to this initiative such an intervention resulted extremely expensive in Italy, both for the kind of technical solutions adopted and because of the long time required for their implementation. Thanks to SAVE THE FLYERS, ENEL, partner of the project, has implemented a new protection of power lines by insulating the conductors next to pylons with sheath and self-agglomerative tape. This choice proved to be successful by providing good results at much lower costs compared to other types of intervention.

Amongst the most effective conservation actions there are to be mentioned the installation of gates at the entrance of some caves, thus reducing human accesses in the sensitive periods; cleaning of grasslands and thinning of forests, making available new areas for the feeding of bats; repopulation by red kite of the Amiata area, leading to the establishment of a new population and finally the securing of power lines ensuring the prevention from electrocution of the red kite and other bird species.

It is to be mentioned also the monitoring of the sensible species allowing the identification of the most dangerous parts of the power lines and thus a prioritization of the interventions to make better use of the limited available  resources.

The main results were:

Several initiatives have been put in place to promote awareness raising and involvement of the population and local stakeholders. A specific "door to door" campaign was organized, involving about 65 structures for each project area. 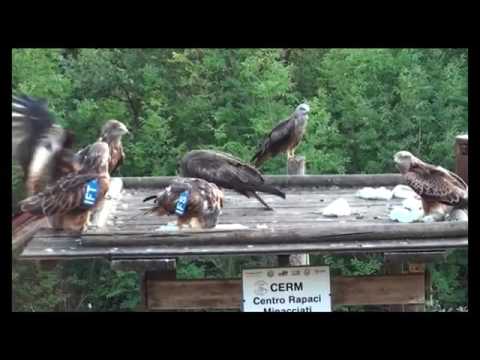