The RI.CO.PR.I. project was dedicated to the restoration and conservation of two habitats of dry grasslands, namely habitat 6210 “Semi-natural dry grasslands and scrubland facies on calcareous substrates” and habitat 6220 “Pseudo-steppe with grasses and annuals of the Thero-Brachypodietea”. As far as the protection of these habitats depends mainly on the rationality of the agro-pastoral management practices, many of the project activities were assigned directly to the farmers. These activities were performed in three sites of community interest (SCI) included in the “Natura 2000” network, two of which situated in the Province of Rome; SCI IT6030037 “Monte Ruffi” (SW mountainside) and SCI IT6030035 “Monte Guadagnolo”, respectively in the municipalities of Cerreto Laziale and of Capranica Prenestina, while the third, in the Province of Potenza, was the SCI IT9210105  “Dolomiti di Pietrapertosa” within the Regional National Park “Gallipoli Cognato Dolomiti Lucane”. Pasture represents an important reservoir of plant and animal biodiversity. In particular, arid Mediterranean and mountain pastures are habitats in which the greatest number of plant and invertebrate species are present both in absolute terms and in terms of diversity as well as of rare and endangered species, as underlined by the Natura 2000 directive. Grasslands are being replaced by increasingly invasive shrubs. For this reason, in Europe, they are considered among the most threatened ecosystems. In Italy, in the period 1970-2000, there has been a reduction of 38% of the total area. Just to give an example in the SCI “Monti Ruffi” the pseudo-steppe of the habitat 6220 has reduced from 55% of the total area to 1%, since the designation of the site in 1995 to the preparatory project studies in 2012. Also particularly alarming is the decrease, observed in Europe between 1990 and 2009, by almost 60% of the butterfly populations in the dry grasslands of which they are a good biological indicator. In Europe 274 of the total of 436 Lepidoptera species are dependent on dry grasslands. The project, implemented on over 450 hectares, has improved the conservation status of the habitat through the involvement of all interested actors and considering the grassland in all its aspects: habitat, rare/ endemic floristic species, invasive species, Lepidoptera, breeders, local products, native breeds cattle, pasture, tourism.

In the first phase of the project preparatory activities were carried out for the ex ante monitoring of the grassland and of its lepidopteran populations; state and types of the pastures were studied, and grazing plans were drawn up.

The main project actions were certainly aimed at improving grazing management thanks to specific grazing plans drawn up in collaboration with local farmers, having the dual purpose of rationalizing grazing, avoiding over- and under-grazing, and achieving benefits both for the resident populations and for the present species and habitats. For the implementation of the grazing plans the following works were realized:

The monitoring of grassland species was carried out in different ways: realization of permanent squares to preserve plant species from grazing and to study vegetation subject of  grazing or not; phyto-sociological surveys in the areas subject to rational grazing and to environmental recovery interventions; detailed mapping of the habitats in the three sites to highlight the evolutionary dynamics of vegetation resulting from the recovery interventions.

During the project, studies were carried out on changes in the butterfly populations of the three SCI, both because butterflies are considered bio-indicators of the conservation status of habitats and because in two of the three project sites (“Monti Ruffi” and “Monti Guadagnolo”) presence of two lepidopteran species of community interest,  Melanargia arge and Eriogaster catax, was reported.

The last project phase focused on outreach and education activities aimed at disseminating among the younger generations knowledge about the interested environments and information on the performed work.

The recovery of the grasslands of the two priority habitats and of the different related species, realized within the frame of the RICOPRI Project, gave a significant contribution in halting the loss of biodiversity of the area. For the environmental requalification seeds of 20 species collected in the target habitats were used. A germplasm bank has been created to conserve in situ the typical plant species of these grasslands. The socio-economic aspect of the project was also considered being the target habitats only partly natural, hence interested by productive human activities. In fact the recovery of the grasslands was necessarily correlated with the recovery of herding as foreseen by the Europe 2020 Strategy for growth and employment.

To tackle the abandonment of herding and to give input to local entrepreneurship a sheep-herd of “Sopravissana” breed was purchased, reintroducing sheep grazing in areas where it was quiet disappeared leaving place to bovine herds, causing consequent imbalances on the grazing load.

Another innovative aspect was represented by the creation of permanent squares used for monitoring the grasslands, serving as simple but yet valid instrument for analyzing the evolution of the different grazing methods’ evolution as observed over the period of the project’s duration.

The surfaces interested by the grazing plans of the three sites (SCI “Monte Guadagnolo”, SCI “Monte Ruffi”, SCI-SPA “Dolomiti di Pietrapertosa”) were bigger than it was originally foreseen (420 ha), resulting in a total of 456 ha (374 ha of the habitat 6220 and 82 ha of the habitat 6210), where rational grazing can be introduced to prevent over- and under-grazing. Direct involvement of the local community and of the farmers in the implementation of the conservation actions was surely key to the project’s success, which even exceeded the expected results for some actions.

The following results of the RICOPRI Project worth highlighting:

Guidelines for the eradication of alien and ruderal species and Guidelines for the study of grazing’s state and types were issued. An extra result concerning monitoring activities was the finding of 2 lepidopteran species not indicated but included in Annex II of the Habitats Directive:

Direct involvement of the local community and of the farmers in the implementation of the conservation actions was surely key to the project’s success. Almost all minor activities were carried out with the help of local workers (cutting of shrubs and of the alien ruderal species in SCI “ Dolomiti of Pietrapertosa”), or committed to the same farmers using the pasture (removal of shrubs and seeding in both sites in the Lazio Region, removal of alien species in SCI “Monti Ruffi”, arrangement of fences in SCI “Monte Guadagnolo” and SCI “Dolomites of Pietrapertosa”). Moreover the owners of the troughs rearranged within the Project in the SCI “Dolomiti di Pietrapertosa” signed a free-use contract with the Park, therefore their troughs can be used by anyone. Finally an Ex post conservation plan was also produced within the project. 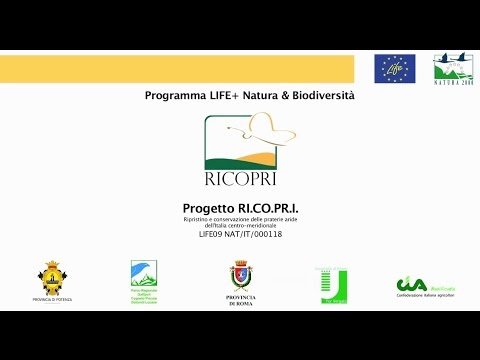