The silver fir, a conifer tree, which has seen a significant expansion in the period following the last ice age, in recent times has recorded a great regression of its distribution area due to several reasons among which the  human interventions and the reduction of atmospheric humidity. Even if the main cause of this regression is the human intervention, the changed climate conditions impact negatively the silver fir’s capacity to expand naturally by regeneration. Climate change forecasts for the near future don’t promise any improvement, rather this species could face the risk of a yet more intensive regression due to the changing climate conditions in the next decades. If in the following years the forecasts turn out to be right, the isotherms will grow at a rate of 11 meters of altitude and 2-3 kilometers of latitude per year. This could lead to a shift, within the next 20 years, of the optimal thermal conditions of this species from the common altitudes, between 800 and 900 m asl, found in the phytoclimatic zone of the castanetum freddo-fagetum, to more than 200 meters higher, i.e. between 1100 and 1200 m asl. The LIFE Resilfor project had the objective to halt the loss of the habitat 9220* “Apennine beech forests with Abies alba and beech forests with Abies nebrodensis”, through the reduction of the risk of genetic segregation of Abies alba relict populations and of the risk of their disappearance due to the climate change. The project activity was aimed at protecting the original populations and recreating in some area – which can be considered suitable at the light of the foreseen effects of the climate change - spatial models in which the genetic characteristics of the original populations are well represented in order to obtain spontaneous renewal phenomena in the short term. As secondary objective of the project further actions were carried out to protect other species of animals and plants, which are part of the same ecosystem; nucleuses of Taxus were reconstituted within beech formations, and the reproductive sites of spectacled salamander, yellow-bellied toad, rosalia longicorn and lucanus cervus were strengthened. The areas of intervention of the ReSilFor project, characterized by the presence of four indigenous beech-fir populations of the central Apennines, were La Verna in the province of Arezzo, Bocca Trabaria in the province of Pesaro-Urbino, Pigelleto in the province of Siena and Valle della Corte in the province of Macerata. The involved Sites of Community Importance were: SCI IT5190013 - Foresta del Siele e del Pigelleto di Piancastagnaio, SCI IT5180002 - Foreste alto bacino dell’Arno, SCI IT5180018 - Foresta di Camaldoli e Badia Prataglia, SCI IT5310010 - Alpe della Luna Bocca Trabaria, SCI IT5340008 - Valle della Corte. They are all located in mountain areas where the anthropic settlements are very small and the main economic activities are those related to forest management.

The preliminary phases of the project were aimed at investigating the presence in time of fir and taxus, and at investigating the genetics of the silver fir (Abies alba) populations in order to better understand – through the extraction of DNA – its genetic structure and the genetic characterization of the indigenous populations in the area of La Verna, Pigelleto and Bocca Trabaria.

The innovative value of the project consisted in testing on a large scale conservation actions of forest species by techniques of assisted genetic translocation. This was realized starting with the creation of a permanent monitoring network to observe the adaptive properties of the species, and then establishing reproduction patterns based on agamic propagation through grafting. The agamic progenies were then inserted in forest contexts where, in 10-15 years, they will become able to fructify and spread the seeds naturally in the adjoining forests.

The main actions of the project were:

This project is the first step of a series addressing the conservation of the silver fir in the central Appenine area by  assisted genetic translocation techniques. About 60 mother plants were reproduced in clonal copies with by  grafting and distributed in the Central - Northern Apennines. In the long run, the project aimed at obtaining about 70 hectares of broad-leaved forest areas rich in white fir renewal, whose genetic characteristics will respond to those of the native populations of origin.

The tangible results of RESILFOR are the following:

A technical scientific publication on the project activities was issued in e-book format, which summarizes the main scientific results of the project and the developed intervention strategies. A Video of the  project is also available.

The project is included in the Life GoProFor database. For further information click here 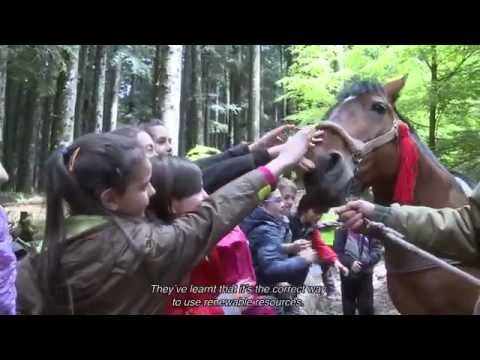