The Re.S.C.We. project was built on interventions of renaturation and conservation aimed at restoring the pre-existing wetlands and protecting the residual dune formations along the coastline within the Sentina Regional Natural Reserve (SCI IT5340001; SPA IT54400022), in the municipality of San Benedetto del Tronto. This Reserve is the smallest and one of the youngest protected areas in the Marche Region. It is characterized by about 1700 meters of coastline with a small dune system along it, giving home to a spontaneous vegetation. This environment is strongly at risk due to the phenomenon of coastal erosion that prevents its natural evolution. The performed actions addressed the coastal areas presenting different ecological aspects, and in part interested by the priority habitat 1150 “Coastal lagoons”. Some human interventions in the 80s impacted very negatively the functionality and biodiversity of the area. The project had the following main objectives:

The problem of coastal erosion represents one of the main threats for the ecosystems in the Sentina Reserve. Notwithstanding that, in the most intact areas several plant species of considerable conservation interest were found, including Calystegia soldanella (morning glory), Polygonum marinense and Euphorbia paralias (sea spurge). The area is notably important not only for the vegetation (the site has been declared by the Marche Region "Protected Floristic Area"), but also for migratory birds. It is in fact one of the very few resting points for migratory birds between the Gargano and the Emilian wetlands, so as to be recognized as a Special Protection Area (SPA) and Site of Community Importance (SCI). The back-dune wetland is extremely heterogeneous, being characterized by small pools of constantly present or seasonal fresh or brackish water. This heterogeneity supports  the life of many species of birds which stop there during their long migratory journeys; among these we remember the black-winged stilt (Himantopus himantopus), symbol of the Reserve and precious visitor of the Sentina. But you can count many other species including cattle egret (Bubulcus ibis), common kingfisher (Alcedo atthis) and several species of anatidae and passerines (Cetti's warbler).

In the first phase of the project a series of specialist studies (geologic, hydrologic, botanic and topographic) were performed in preparation of the conservation actions. The main environmental restoration actions concerned the recovery of a complex system of coastal wetlands, suitable to provide migratory birds crossing the Adriatic flyway, with feeding, resting and reproduction habitats. The project envisaged to implement restoration through the recovery of a complex set of interconnected, integrated and functional environments, each of which constitutes in fact a single "conservation action":

The project scheduled also specific actions for the reintroduction and the medium-long term maintenance of some vegetal and animal species, which were autochthonous and originally present in the area but today disappeared. In particular vegetal species such as Artemisia and Pampas grass, Sea lavender and Plantain, and animal species as the European marsh turtle.

In a further phase of the project a new fruition system of the renatured environments was realized, consisting mainly in paths and birdwatching facilities. Particular attention was paid to environmental education and awareness raising activities addressing especially young generations through multiple actions aimed at disseminating information about the peculiarities of the Sentina Natural Reserve, thanks also to the support of  CEA (Center for Environmental Education) "Torre sul Porto", created in 2011 during the LIFE Project. To this purpose training courses were organized for the Reserve’s staff and voluntary environmental associations  operating in the area in order to guarantee an adequate management of the interventions to be realized.

The project monitoring highlighted the positive effects of the wetlands’ restoration with particular regard to the fauna (amphibians and migratory birds).

The Re.S.C.We project allowed the restoration of the habitat 1150* Coastal lagoons and brought numerous benefits to other habitats including 1310, 1410, 1420. 2120, 2240. The greatest environmental benefit was drawn by the habitats 1310 and 1150*. The habitat 1150 was progressively reduced, but thanks to the project it was possible to recover a heterogeneous complex of coastal wetlands, with evident positive consequences for amphibians and migratory birds, ensuring a satisfactory state of conservation of the natural habitats and species of wild fauna and flora of Community interest. This allowed the reintroduction of extinct plant and animal species, but also the recolonization of the area, especially during migratory periods, by some bird species such as Shovelers, Shelducks, Cranes and White-fronted geese. No new species of amphibians were detected compared to those already known but the populations of the European green toad (Bufo viridis) and the Italian tree frog (Hyla intermedia), which are of major conservation interest, have increased. The initiative helped to mitigate the seawater intrusion - caused by the excessive exploitation of the freshwater aquifers, coastal erosion and drought - with the constant supply of low level salinity water into the soil and groundwater through a hanging irrigation system designed for the realization of back-dune ponds. This intervention allows, especially in the summer period frequently subject to drought, a continuous supply of low level salinity water into the soil and the aquifer. The increase in heterogeneity of the habitats, with the consequent increase in faunal and floristic biodiversity, increased the ability of the coastal areas to adapt to possible new scenarios. The project showed how even these highly compromised areas, surrounded by massive anthropization and with reduced and damaged priority habitats, can undergo specific interventions capable to significantly increase the environmental quality through the good practice represented by a proper management of the coastal dune areas.

The actions and activities carried out within the project completely reversed the situation of degradation: today the protected area is considered integral part of the city, it is habitually frequented by families, cyclists and birdwatchers. This awareness by the citizens and decision-makers has in fact guaranteed the conservation in the medium-long term of the area. 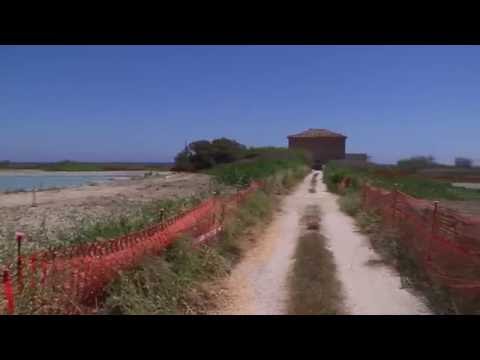