The purpose of the BISCOL project was to reduce the environmental impact of the dyeing process in the textile industry.

Each phase of the textile production process requires huge quantities of water, energy and chemical compounds (coloring agents, surfactants etc.) to obtain products which satisfy the consumer demand. The daily water consumption of a medium-sized company with a production of about 8.000 kg of fabric per day is about 1,6 million liters of water. Of these, 16% is water consumed in the dyeing process and 8% in the printing process. In general, the consumption of water for dyeing is estimated at around 40 L per Kg of fabric with variations based on the type of dye used.

In the BISCOL project, the entire processing cycle was analyzed and redesigned: from the fabrics’ pretreatment (carried out with plasma technology, therefore without the use of process water and chemicals and with a reduced energy consumption), to the synthesis of dyes and auxiliaries dyeing with low environmental impact, up to the optimization of the dyeing process. The Life Cycle Assessment (LCA) methodology was used to demonstrate the reduction of the environmental impact of the process proposed in BISCOL compared to the traditional one. Fig. 1

The BISCOL project developed a new textile dyeing process based on the optimization of the entire process, from raw materials to the finished product, with particular attention to saving energy and reducing water and chemical uses, notably:

The results based on the primary data obtained by the project consortium clearly show that significant environmental benefits can be achieved with the proposed new dyeing protocol: 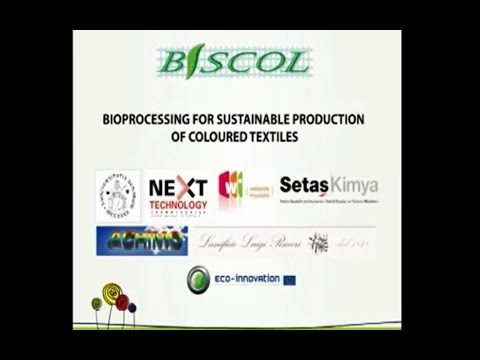